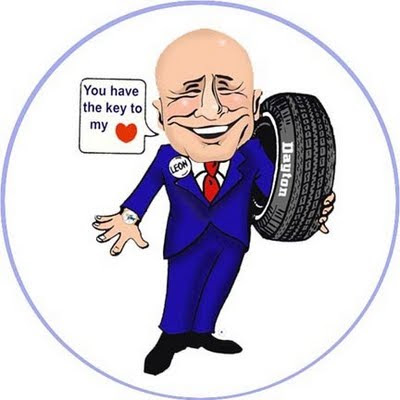 DAYTON TIRE
Dayton tire, in Cranston, was owned by Leon Kayarian
and had a big building right next to 95 north. It was so well known that the
traffic reports used to refer to back up on 95 all the way back to the
Dayton Tire Building! everyone driving north would check out the electric
"crawl type sign" that had the time and temperature to see if they'd be late
for work. He had a character of himself done with a big smile, wearing a
blue suit and shouldering a Dayton tire on his left shoulder, on the building
about 10 ft high. remember? He put tire on lots of RI cars with his
"buy 3 get one free" slogan. Then he gives the customer a watch with his
cartooncharacter on it's face. He used to run commercial where in he'd say
"Let me replace those daaaagerously bald tires" .
making fun of his totally bald head.